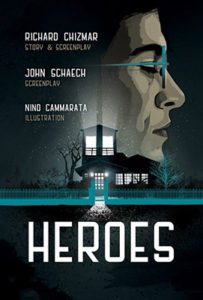 “Heroes” by Richard Chizmar was first published twenty-five years ago and has become Chizmar’s most-reprinted short story. It has been praised by the likes of Publishers Weekly and Locus, and in an introduction to this brand new tribute book, Chizmar explains why the story is so special to him:

Originally written for a paperback anthology of vampire tales, I still remember receiving the invitation from the book’s editor and feeling determined to do something different with the vampire mythology.

While I loved the scary, bloodsucking vampires of Dracula and ‘Salem’s Lot and I Am Legend, I figured that most of the anthology’s writers would wind up following that familiar dark path—and I wanted to try something else. Something focused on the lore-based concept of vampires being able to grant eternal life with a bite to the neck—but in an uplifting manner, instead of a menacing one.

Somehow, from all those admittedly jumbled thoughts, I ended up with “Heroes”—a story about love and hope and redemption. Not in the romantic sense, mind you, but instead a father and son love story.

A love letter, as it turned out, to my own father, who was doing quite fine at the time, still out there in his mid-60’s, mowing the lawn and tinkering with his car most evenings in the garage.

I wrote the story longhand, sitting in my junker of a Datsun in a college parking lot. I remember the story surprised me. It came fast and furious, and when I finished scribbling the final sentence, I had a lump in my throat.

The story wasn’t scary, and it never once utilized the word “vampire”—but it was powerful and true, and most of all, it was me.

My voice. My heart. My fears.

It was the first time I’d felt that I had written a truly “honest” story—and it felt like magic.

Many years later, Chizmar’s childhood friend and successful actor/director, John Schaech, would fall in love with “Heroes,” and the two of them would combine forces to write and produce a short movie based on the story starring Djimon Hounsou and Christina Applegate.

Now, for the first time ever, the original short story “Heroes” will appear alongside the original film script (co-written by Chizmar and Schaech) and a special graphic adaptation (featuring stunning comic artwork by Nino Cammarata) created exclusively for this special volume. In addition to featuring rare photographs from the film set, Chizmar and Schaech also contribute an original Introduction and Afterword.