“Anthology editors Chizmar (the Shivers series) and Freeman (the Dark Screams series) build tension and hook readers … with this svelte tale of modern small-town life gone wrong … The characters are instantly engaging, and the story moves at such a satisfying clip…”
—Publishers Weekly

“Filled with enough plot, characterization and metaphorical heft to stuff a full-length novel, Darkness Whispers brilliantly depicts the supernatural exploitation of a small town’s moral failings. Subtly shifting from Bradbury-esque whimsy to badass horror worthy of the King himself, the novella is a major achievement by Richard Chizmar and Brian James Freeman.”
—Bentley Little

“Darkness Whispers begins as a visit to a golden-hued, idyllic town that soon gets dark. Very dark. I quickly gave up trying to second-guess the formidable authors and simply surrendered to their lead all the way to the shattering conclusion. Chizmar and Freeman know that horror doesn’t work without humanity, and with this story they succeed in chilling our blood and breaking our hearts.”
— Ray Garton 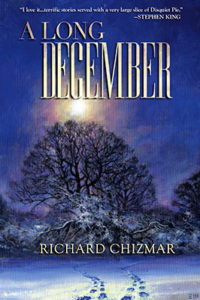 “With the whiff of classic pulp fiction about them, these chilling tales pack a giddy wallop and make staying up late to read just one more mandatory.”
—Kirkus Reviews (starred review)
Read full review

“This is a must-read for fans of intense tales where psychological suspense and horror overlap.”
—Booklist (starred review)
Read full review

“They say you can’t go home again, and many of the 35 quietly creepy stories in this career-spanning collection make it clear why one might not want to.”
—Publishers Weekly
Read full review

“The book will entertain you, scare you, move you, and make you meditate about how weird and unpredictable life is and how fragile and sad is the human condition.”
—SFRevu
Read full review

“Chizmar provides some genuine scares and plenty of variety to keep any horror fan up late, buried between the pages.”
—The Horror Fiction Review
Read full review

“And that’s when he does it. That’s when he gets you. The very moment you settle into the chair and smile at the blissful normalcy of it all is when the other shoe drops. And by ‘drops,’ I mean it comes down and kicks you right in the breadbasket. Leaves you chilled or dizzy or sickened or sometimes just terrified.

“You see, Richard Chizmar has heart. And that heart shines through in every story he writes. You feel like you’re getting a little piece of Richard Chizmar in every tale. You’re there with him, watching as he grows and develops and matures and fights and wins and loses and everything else that a guy comes across in thirty years of living. Thirty years of writing.

“And it’s all that heart. All that earnestness. All that -humanity- that he instills in the work that makes it so goddam brutally effective when he comes along and guts you with something that turns your spine to ice. And therein lies his greatness as a writer of dark fiction.”

“As a procurer of the bizarre and unsettling, Richard Chizmar has no equal, and here he has crafted some fine shadows of his own. Each tale in A Long December is a magic trick, luring you toward the light while leading you down an ever-darkening path. There is hope mingled with horror, and that’s Chizmar’s secret power. His storytelling always beats with a huge, passionate heart. Sometimes that heart has been extracted by a madman and planted in the earth, but still…”
—Anthony Breznican, Entertainment Weekly

“Like Ray Bradbury, Richard Chizmar has a sweet, nostalgic streak. The past in his stories is always a warm, perfect place. The present, however, belongs more to Robert Bloch, as wonder gives way to horror. The twists are worthy of the old Twilight Zone. Enjoy.”
—Stewart O’Nan

“It’s an idyllic little world Richard Chizmar has created. Boys fish in the shallows of a winding creek. A father tosses a baseball with his young son in the fading light of a summer day. There’s the smell of fresh-cut grass. And then, well…just beneath the surface? There are those missing pets whose collars turn up in a shoebox. Or the disturbing photos the dead can leave behind. Or the terrible thing you might find yourself doing when a long lost brother suddenly returns, demanding money. Chizmar does a tremendous job of peeling back his world’s shiny layers, revealing the rot that lies underneath. His stories feel like so many teeth: short and sharp and ready to draw blood.”
—Scott Smith

“Richard Chizmar’s voice is authentic and powerful, and the stories he tells in A Long December are a joy, by turns dark and darkly funny, always compelling, always evocative. He hooks you fast and his words will linger in your mind long after you’ve finished reading, the mark of a special talent.”
—Michael Koryta

“Richard Chizmar is the kind of writer I love—his prose is sharp, simple, and to the point. He grabs your attention in the first paragraph, and never lets go, and, even better, his writing never gets in the way of his story. It flows so smoothly it’s as if you’re experiencing it rather than reading it. Another writer told me years ago that whenever he wrote what he thought was a showstopper of a sentence or paragraph, he would stop writing, admire his work, then immediately cut it. ‘The last thing you want the reader to do is stop to admire the writing,’ he said. ‘All that does is pull them out of the story you’re trying to tell.’ This, of course, is not advice you’ll ever hear from MFA writing programs, but for those of us battling in the trenches every day, it was great advice. Chizmar is a master of this form, and hats off to him!”
—John Saul

“A wonderful, masterful collection—terrifying stories full of heart and soul…and darkness. Sure to please even the most jaded reader.”
—Brian Keene

“Chilling and thought-provoking tales that quietly uncover horror in the most ordinary of lives.”
—Kelley Armstrong

“Richard Chizmar has a very special talent for creating a homely, believable world — the kind of world that you and I live in every day. But he gradually invests that world with a creeping sense of unease, and then he throws open those suburban front doors and brings us face to face with all the unthinkable horrors that have been hiding behind them.”
—Graham Masterton

“ …a highly talented dark suspense writer with a wide range of subject matter and a knack for clear, straightforward, but evocative prose that may remind you of Stephen King, Dean Koontz and Ed Gorman.”
—Ellery Queen Mystery Magazine

“Richard Chizmar is a master delineator of two phenomena – the human condition and the inhuman condition. Some of his people may be monsters, but Chizmar has the rare talent to make you see his monsters as people. His work eloquently and expertly expands the dimensions of the genre…and should concern anyone interested in exceptional writing talent.”
—Robert Bloch

“…a writer of great accomplishment. His work, always effective, is notable for its clarity and originality of concept. Chizmar has a great gift for the sinister.”
—Peter Straub

“Richard Chizmar will soon distinguish himself as a major writer of American suspense fiction.”
—Ed Gorman

“Richard Chizmar is the kind of writer who gives the genre of dark fiction the dignity it deserves. He is not only a superb writer, but a seductive storyteller as well. He dangles hidden secrets in front of our faces, and then dares us not to follow him as he pulls away. We do follow, we have to follow. With vivid characters, confident prose, dialogue so realistic that the pages nearly speak it aloud, and carefully constructed plots, Chizmar makes us follow those hidden secrets he dangles before us, just out of reach, and at the end of the journey, we are always amply rewarded.”
—Ray Garton

“Richard Chizmar is one of the great, unsung short story writers in the horror genre. His work is powerful, bruising and often emotionally devastating. His new novella, A Long December, which closes this collection, is a towering achievement in an already impressive career.”
—Josh Boone

“Richard Chizmar’s stories are brisk but thoughtful, sometimes tender and sometimes baring their teeth…and occasionally at the same time. His work has a distinctive and human—and eminently readable—voice.”
—Mick Garris

“Tight, imaginative and totally engaging writing make this a must have book. Grab a copy of A Long December. It’s fantastic.”
—Joe R. Lansdale

“In A Long December, Richard Chizmar reminds us all that not only is he an accomplished editor and publisher, he is also one hell of a writer. This is something most of us have known forever, but given Rich’s preoccupation with launching the careers of a thousand other writers via Cemetery Dance, fresh examples were few and far between. Thankfully we now have a season’s worth of treasures to savor, and given the breadth and scope of the nightmares contained within this massive tome, and the sure hand with which they have been created, Chizmar’s enormous talent as a writer is something we’re unlikely to forget anytime soon. In all respects, he is one of the best in the business, and this book is a veritable feast for horror fans.”
—Kealan Patrick Burke

“Richard Chizmar writes like a man who’s been to hell and back and lived to tell its tales.”
—Clive Barker

“There’s a nostalgic pulp sensibility to the stories in Richard Chizmar’s A Long December, and it is neatly rendered in a way as to be refreshing and deeply disturbing. These stories are about our secrets, and our darkest and deepest desires. Full of heart and nasty shocks in equal doses.”
—Paul Tremblay

“Comparisons to Ray Bradbury and Stephen King come to mind first, but as you journey through Richard Chizmar’s stories – peopled with the ordinary, dark and dangerous – you begin to realize this is purely Chizmar territory and there is no escape. The prose is taut, the insights surprising. A Long December is a vivid, disturbing, darkly humorous work by a writer at the top of his game.”
—Douglas Clegg