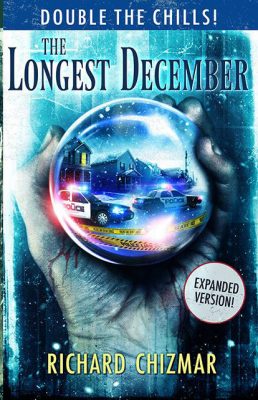 A Face in the Crowd & The Longest December
by Stephen King, Stewart O’Nan, and Richard Chizmar

This will be another World’s 1st Edition from Cemetery Dance Publications: a unique new book published in the old-fashioned “double” tradition!

A Face in the Crowd by Stephen King and Stewart O’Nan (FIRST TIME IN HARDCOVER!)
Dean Evers, an elderly widower, sits in front of the television with nothing better to do than waste his leftover evenings watching baseball. It’s Rays/Mariners, and David Price is breezing through the line-up. Suddenly, in a seat a few rows up beyond the batter, Evers sees the face of someone from decades past, someone who shouldn’t be at the ballgame, shouldn’t be on the planet. And so begins a parade of people from Evers’s past, all of them occupying that seat behind home plate. Until one day Dean Evers sees someone even eerier…

The Longest December by Richard Chizmar (EXPANDED VERSION!)
Bob and Katy Howard are a typical middle-aged couple living the good life in the suburbs. They’re happily married, have successful careers, and a grown son starting college. Their recently widowed next-door neighbor, James Wilkinson, is practically a member of the Howard family. When police show up at the Howard’s doorstep one snowy December morning with the news that they have been investigating Wilkinson for a series of violent crimes, Bob and Katy are left in shock and disbelief. The elderly James Wilkinson they know and love is kind and gentle. He shared their Thanksgiving table just a couple weeks earlier. He couldn’t possibly be responsible for the gruesome deeds of which he’s being accused. Or could he?

The Longest December (a revised and expanded version of Chizmar’s acclaimed novella, A Long December) is a cat-and-mouse, Hitchcockian thriller that will shock you with its brutal twists and turns while also breaking your heart. Stephen King calls it “…a really terrific piece of work. I couldn’t put it down. Chizmar played his cards with great craft. I’m an old hand at this, but I kept chasing the red herrings.”

Signed & Traycased Deluxe Hardcover Lettered Edition:
• Limited to just 52 signed and lettered copies personally signed by Stephen King, Richard Chizmar, Stewart O’Nan, and the artists on TWO signature sheets!
• Housed in a custom-made deluxe case that will display this special edition in a unique way
• Featuring considerable upgrades in every aspect of production from the Artist Edition — this will be the most beautiful special edition we’ve ever published!
• Bound in a fine imported leather with colored head and tail bands
• Lined with deluxe endpapers created exclusively for this edition
• Page edges gilded by hand by an expert book crafter
• Smyth sewn to create a more durable binding
• Includes an ORIGINAL PIECE OF ARTWORK by François Vaillancourt in your book — not a print, not a reproduction, but an original painting unique to your copy!
• Limited ONE TIME printing of this special edition
• Retail price: $4000

“In a searing tale of love, trust, truth, and lies – Chizmar grabbed my hand and led me on a journey that was unlike anything I had experienced up till this point.” — Gruesome Magazine (read the whole review)