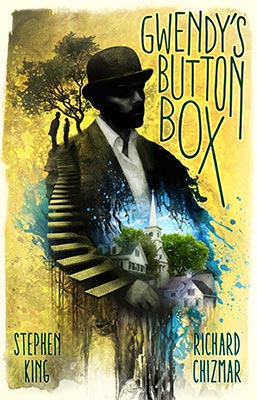 There are three ways up to Castle View from the town of Castle Rock: Route 117, Pleasant Road, and the Suicide Stairs. Every day this summer—yes, even on Sundays—twelve-year-old Gwendy Peterson has taken the stairs, which are held by strong (if time-rusted) iron bolts and zig-zag up the cliffside. She walks the first hundred, jogs the second hundred, and forces herself to run up the last hundred and five, pelting—as her father would say—hellbent for election. At the top she bends over, red-faced, clutching her knees, hair in sweaty clumps against her cheeks (it always escapes her ponytail on that last sprint, no matter how tight she ties it), and puffing like an old carthorse. Yet there has been some improvement. When she straightens up and looks down the length of her body, she can see the tips of her sneakers. She couldn’t do that in June, on the last day of school, which also happened to be her last day in Castle Rock Elementary.

Her shirt is sweat-pasted to her body, but on the whole, she feels pretty good. In June, she felt ready to die of a heart attack every time she reached the top. Nearby, she can hear the shouts of the kids on the playground. From a bit farther away comes the chink of an aluminum bat hitting a baseball as the Senior League kids practice for the Labor Day charity game.

She’s wiping her glasses on the handkerchief she keeps in the pocket of her shorts for just that purpose when she is addressed. “Hey, girl. Come on over here for a bit. We ought to palaver, you and me.”

Gwendy puts her specs on and the blurred world comes back into focus. On a bench in the shade, close to the gravel path leading from the stairs into the Castle View Recreational Park, sits a man in black jeans, a black coat like for a suit, and a white shirt unbuttoned at the top. On his head is a small neat black hat. The time will come when Gwendy has nightmares about that hat.

The man has been on this same bench every day this week, always reading the same book (Gravity’s Rainbow, it’s thick and looks mighty arduous), but has never said anything to her until today. Gwendy regards him warily.

“I’m not supposed to talk to strangers.”

“That’s good advice.” He looks about her father’s age, which would make him thirty-eight or so, and not bad looking, but wearing a black suit coat on a hot August morning makes him a potential weirdo in Gwendy’s book. “Probably got it from your mother, right?”

“Father,” Gwendy says. She’ll have to go past him to get to the playground, and if he really is a weirdo he might try to grab her, but she’s not too worried. It’s broad daylight, after all, the playground is close and well-populated, and she’s got her wind back.

“In that case,” says the man in the black coat, “let me introduce myself. I’m Richard Farris. And you are—?”

She debates, then thinks, what harm? “Gwendy Peterson.”

“So there. We know each other.”

He throws back his head and laughs. It’s totally charming in its honest good humor, and Gwendy can’t help smiling. She still keeps her distance, though.

He points a finger-gun at her: pow. “That’s a good one. You’re a good one, Gwendy. And while we’re at it, what kind of name is that, anyway?”

“A combination. My father wanted a Gwendolyn—that was his granny’s name—and my mom wanted a Wendy, like in Peter Pan. So they compromised. Are you on vacation, Mr. Farris?” This seems likely; they are in Maine, after all, and Maine proclaims itself Vacationland. It’s even on the license plates.

“You might say so. I travel here and there. Michigan one week, Florida the next, then maybe a hop to Coney Island for a Redhot and a ride on the Cyclone. I am what you might call a rambling man, and America is my beat. I keep an eye on certain people, and check back on them every once and again.”

Chink goes the bat on the field past the playground, and there are cheers.

“Well, it’s been nice talking to you, Mr. Farris, but I really ought to—”

“Stay a bit longer. You see, you’re one of the people I’ve been keeping an eye on just recently.”

This should sound sinister (and does, a little), but he’s still smiling in the aftermath of his laughter, his eyes are lively, and if he’s Chester the Molester, he’s keeping it well hidden. Which, she supposes, the best ones would do. Step into my parlor, said the spider to the fly.

“I’ve got a theory about you, Miss Gwendy Peterson. Formed, as all the best theories are, by close observation. Want to hear it?”

“I notice you are a bit on the plump side.”

Maybe he sees her tighten up at that, because he raises a hand and shakes his head, as if to say not so fast.

“You might even think of yourself as fat, because girls and women in this country of ours have strange ideas about how they look. The media…do you know what I mean by the media?”

“Sure. Newspapers, TV, Time and Newsweek.”

“Nailed it. So okay. The media says, ‘Girls, women, you can be anything you want to be in this brave new world of equality, as long as you can still see your toes when you stand up straight.’”

He has been watching me, Gwendy thinks, because I do that every day when I get to the top. She blushes. She can’t help it, but the blush is a surface thing. Below it is a kind of so-what defiance. It’s what got her going on the stairs in the first place. That and Frankie Stone.

“My theory is that somebody tweaked you about your weight, or how you look, or both, and you decided to take the matter in hand. Am I close? Maybe not a bullseye, but at least somewhere on the target?”

Perhaps because he’s a stranger, she finds herself able to tell him what she hasn’t confided to either of her parents. Or maybe it’s his blue eyes, which are curious and interested but with no meanness in them—at least not that she can see. “This kid at school, Frankie Stone, started calling me Goodyear. You know, like—”

“Like the blimp, yes, I know the Goodyear Blimp.”

“Uh-huh. Frankie’s a puke.” She thinks of telling the man how Frankie goes strutting around the playground, chanting I’m Frankie Stoner! Got a two-foot boner! and decides not to.

“Some of the other boys started calling me that, and then a few of the girls picked it up. Not my friends, other girls. That was sixth grade. Middle school starts next month, and…well…”

“You’ve decided that particular nickname isn’t going to follow you there,” says Mr. Richard Farris. “I see. You’ll also grow taller, you know.” He eyes her up and down, but not in a way she finds creepy. It’s more scientific. “I’m thinking you might top out around five-ten or –eleven before you’re done. Tall, for a girl.”

“Started already,” Gwendy says, “but I’m not going to wait.”

“All pretty much as I thought,” Farris says. “Don’t wait, don’t piss and moan, just attack the issue. Go head-on. Admirable. Which is why I wanted to make your acquaintance.”

“No. You need to stay right here.” He’s not smiling anymore. His face is stern, and the blue eyes seem to have gone gray. The hat lays a thin line of shadow over his brow, like a tattoo. “I have something for you. A gift. Because you are the one.”

Gwendy’s Button Box by Stephen King and Richard Chizmar will be published in hardcover and eBook by Cemetery Dance Publications and audio by Simon & Schuster in May. To learn more about the authors, follow them on Twitter (@StephenKing and @RichardChizmar) and visit their websites (StephenKing.com and RichardChizmar.com).