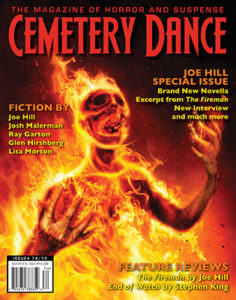 Our flagship magazine, Cemetery Dance, has won every major genre award and is healthier than ever — with a higher newsstand and subscriber circulation than ever before, ever-increasing advertiser support, and a continuing reputation for superb content and design. We’re well-known for publishing the biggest and the brightest stars in the genre, often before they’re discovered by the big New York publishers.

And don’t forget Grave Tales, our entry into the comic book industry where we feature authors such as Joe Hill, Ed Gorman, and Ray Garton, and artists such as Chris Odgers, Glenn Chadbourne, and William Renfro. You can rest assured that CD will generate plenty of excitement and chills in comic shops all over the world!

For more information about our company, please read A Very Brief History of Cemetery Dance.